The following two accounts were given at different times by two volunteers who both worked for Toc H in Norfolk (and elsewhere). The other common ground is that when they came to Toc H they were both serving time in HMP Lancaster. In those days, some prisoners were sometimes allowed to join Toc H projects as part of their rehabilitation and process of assimilation back into society. We were given the permission of both volunteers to use these stories. This is certainly the first time that John’s tale has been published and I don’t believe that Ian’s was ever made public either, though I am willing to be corrected if anyone knows different. I also no longer know Ian’s whereabouts but John, sadly, died in 2014. He was a good friend and a valuable volunteer.

I have applied a light-touch on the editing so these accounts are pretty much exactly as they were written.

My introduction to Toc H

In the summer of 1993 I received a three and a half year prison sentence for fraud. I was eventually sent to a prison with the unlikely name of Lancaster Castle which was in Cumbria. As fate would have it I was allocated to a cell with a guy who was doing projects for Toc H. Lancaster was one of two prisons in England that were unique in that if you were a certain type of prisoner (i.e. model inmate) you could apply to do this voluntary for Toc H. The other one being a young offenders institute called Deerbolt which was situated somewhere in North Yorkshire.

I was soon away on my first project which was taking a group of disadvantaged teenagers down to Lindridge House for a week’s holiday. The group were from the Cardiff area in South Wales so the eve before myself and a band of other volunteers stayed at a Toe H house in the centre of Cardiff, just by the railway station. I will always remember that night because it was so cold and the house had no heating or beds.

Our guests who we were looking after for the week were a mixed group. Downs Syndrome, autistic and able-bodied children.

John McGrath (right) with a guest on a Toc H holiday

The holiday was a great success and a great experience for the volunteers. I found that I had really enjoyed the whole project and when I was on my way back to prison I had this nice feeling inside me , a feeling that I had made a difference co these children’s lives even if it was only for a week.

I was impatient for the next project just so I could get that feeling back again. It was a bit of a downer having to go back to prison after each project but on the whole I felt lucky to be able to go and do these projects. The ulterior motives that I first had had now disappeared giving way to the immense fun and pleasure of actually helping fellow human beings who were less fortunate than myself.

Over the years I have done so many projects and I never get tired of it. After one project finishes my thoughts are on the next one and that’s the way it has gone. Of course I am no longer in prison anymore but I am still doing whatever projects I can. I once read somewhere that it is through change that we find purpose and I wholeheartedly agree with those sentiments. It is through my voluntary work that I have changed as a person and I have a sense of purpose. I have turned my life around and have never been back to prison since my release way back in the early nineties. As well as doing projects for Toc H I also do voluntary work for a charity here in my home town in Liverpool (Team Oasis). So instead of anyone thanking me, I thank all the lovely people I have met through doing voluntary work. That is both fellow volunteers and all the guests I have had contact with and so enjoyed being with. Now I hope to continue and embrace lots more projects. I attended the Year Of the Volunteer Awards at the Theatre Royal in the west end of London recently and what stuck in my mind was that volunteering must come from the heart and you must have a passion for it, and that’s the way I like it. Here is to many more years of volunteering.

How did I learn about Toc H and what effect did it have on my life?

It was on the landing of Lancaster H.M. Prison where over the weeks I gradually gained more information. Little did I know what a week with Toc H was going to mean to me.

Well, Toc H meant a week or weekend out of prison on a project either helping disabled or land reclamation.

I was on a six year prison sentence, having served six months of that time I was still learning the rules of the system. I asked some questions, but felt quite down when I learned that I had to be at my parole date to be eligible. That was one third of my sentence! One has to learn patience in prison.

The person mentioned above blew it. He also lost his parole.

A prisoner needs to be very closely vetted. The governor requires a lot of accurate information in order to make the correct decision. He is taking a chance. Some see it as an opportunity to do a runner.

I got an appeal date on 2nd March 1993, where I had my sentence reduced to 4 years. In my fourteen months in prison this was my best day. This meant my parole date was only two months away. I was buzzing.

After serving sixteen months a prison officer asked me if I would like to go out on a Toc H project, and I said ‘yes’.

As that time I was leaving the prison daily to work in the local hospital maintaining the hospital trolleys. I felt this was proving I was a suitable candidate for a Toc H project and parole. At that time I was waiting for a parole answer.

Then Linda Jones a prison officer concerned with the employment of prisoners, asked me if I would like to go on a Toc H project to a place called Hengrave Hall on Friday 2nd July. I said ‘yes’.

A week before going to Hengrave, Friday 25th June I was given a parole date of 14th July. I was buzzing out of my head. Suddenly it was all happening. I now had four days home leave because of my parole date, on top of my week at Hengrave Hall with Toc H.

The news of the parole was given to me on the 25th June while working at the hospital. Barbara Tolan a prison officer from Lancaster told me she had good and bad news. Good being my parole date with four days home leave. Bad being that I wouldn’t have time to fit in both home leave and Hengrave. There was only 19 days left.

I told Barbara to speak to the governor and ask if I could go on my home leave on Monday 28th June, back Thursday 1st July. Then I would still be able to go to Hengrave on Friday 2nd July. The Governor agreed and that is what happened.

Therefore on Friday 2nd July I set sail by train to Berry St Edmunds where I was to be met by Olive Tennant and an Alan Brooke who organise the Toc H project at Hengrave. I did not realise this was going to have an ongoing effect and change my life.

After travelling for seven hours I arrived at Berry St Edmunds station where I telephoned for Olive and Alan to come and collect me. Hengrave was a large Stately home run as a retreat and conference centre by the Catholic Church. I was made very welcome by everyone.

I was to look after a man who had multiple sclerosis. He could manage most things for himself with some assistance. I was very nervous. Everyone was great, gave lots of encouragement, and this in turn helped give me confidence. 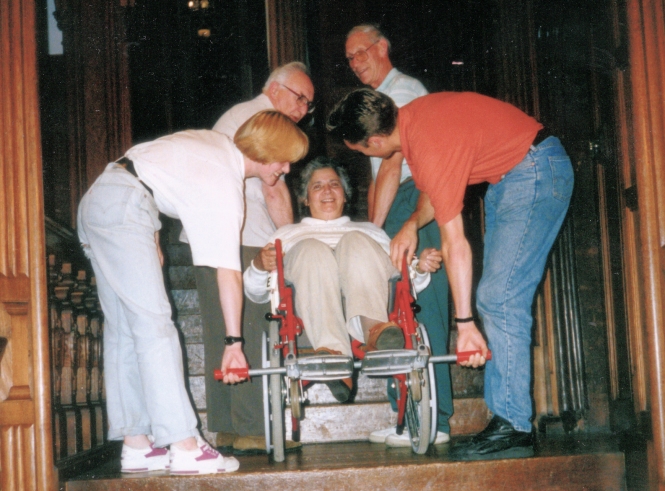 I was doing alright. Olive showed me love and affection that I had not experienced since I went to prison. It was a brilliant week. The best week I have ever had in my life and I had only £30 in my pocket.

The project gave me great confidence to get on with my life when I was released on parole on 14th July. The people I met through Toc H at Hengrave will never leave my heart.

Our daily routine began early in order to wash, shave and dress ready for breakfast at 8.30am. Meanwhile Olive would be out in the grounds hiding wooden blocks with a letter of the alphabet on each. After breakfast we all went block hunting, the only rule being, you had to have someone in a wheelchair with you. All blocks found were given to Olive. On the Thursday night before we left there was a prize for the pair who collected the most blocks and a prize for who guessed the correct rhyme about Hengrave from the letter son the blocks.

After lunch there was an outing in the bus to some local area of interest. The evening meal was at 6.30pm after which there was some kind of entertainment.

Leaving Hengrave on Friday lunch time for Lancaster H.M. Prison proved to be a very emotional experience. The week had been good for me. I told Olive and Alan that I would be back and they smiled in agreement. I think they had heard it all before but they invited me to the reunion in March ’94 of the following year.

I think at the latter stages of your sentence, before your release a project like this is a valuable experience of being amongst people again.

I attended the reunion in March and was invited to join them again at Hengrave in August ’94.

This time I looked after a lovely man who was paralysed from the neck down. Although hard work, another wonderful week which left me very happy, content and humble at how graciously this man accepted his disability. I have since visited him in hospital but distance is the problem. I live in Paisley and he is in hospital in Great Yarmouth.

1995 again saw me at Hengrave Hall and it will always have a special place in my heart as will all the reunions I have attended but it is now time for me to move on.

In October of ’95 I attended the Scottish Conference at Dunblane of Toc H and in the future I plan to become involved nearer home in Scotland. Working with disabled people changes your outlook on life. It puts everything into perspective and makes one appreciate the simple things that one takes for granted.

As I have said I think Toc H was a valuable experience at the end of my sentence. New faces, new outlook, new ideas helps build your self esteem. It is up to each individual, but for my part Toc H was there to help me at a very crucial stage in my life.

Two and a half years on I have built up my life again. I have bought my own flat (mortgaged), own my own car and have found consistent employment since my release.